A little humor in the mix

There are different types of Dates : People you like who don't like you, People who are amazing but you feel no connection, and then the infamous BAD DATE. Once in a Blue Moon there's the perfect Date but its rare. Unfortunately, there are more Bad Dates than good but they are great for laughs with friends so let’s have some fun!

Comment with your own stories, I'm sure we've all been there and you aren't alone. (Some people will use this chance to be mean, but please be nice. This is all in good fun.)

The Director: For this story I need you to be familiar with some 80s nostalgia.

THE GUY: This is a blind date but this is what I know - he's taller than me, thin, pale, doesn't socialize a lot, dorky, smart, works for a TV Station, brown hair. He's directed a few episodes of some series that I've never seen. Part of me is always thinking it will be an awful blind date, but there is a part that is excited and afraid to be hopeful. He has my photo.

"Yea, I’m here" I call into a crowd of people outside a pre-determined restaurant.

I turn. He's tall, brown hair, pale, looks cute dorky (all good)... with a unibrow. Hit the brakes. I can't help but stare. It’s hard to describe because you’re thinking two clearly defined brows and then some hair in the middle and if you took a tweezer or wax it would be easy right? NO! This wouldn't! It looks as though the right one perfectly carries over to the left one with no dip to determine which one is which. I've honestly never seen this before and immediately feel horrible because I can't take my eyes off of it.

"This is me... You can decide, do you want to grab a dessert and coffee" he says.

I'm not attracted. Even if you took the unibrow away, there is nothing in me that wants to cuddle or sleep with him but I am a hopeful person and can at least make a friend, right?

We sit down and are given menus. I try to look over at him at his eyes but I keep looking north at that brow and wondering if I did have the option to tweeze it... how? Where? What is going on here? There's really nothing that gives any hint of a separation, and then it happens. The noise. This very high-pitched whine noise that then falls to a really low note. Over and over and over. What the hell is he doing!

Pause - This is where you need to know The Dark Crystal. The noise is verbatim Chamberlain. If you don't know what I mean, YouTube "Chamberlain's Whimpers Dark Crystal".

Resume - I look at my menu and then back at him. He's staring at the 4 options of desserts and making this noise over and over. Are you kidding me? Stop it! I realize I'm gripping the menu a little hard and my teeth are clenched. It’s like nails on a chalkboard. I relaxed, and shook my head as if to shake the negative thoughts from my head.

"Okay girl, he gets a pass on the unibrow and the whimper. He's still a good person and this could STILL be a good date. Hang in there" I tell myself.

The waitress comes and thank god because it stops that infernal whining!

"I'll have the cheesecake and coffee please"

I order. He gets the same. He looks at me begging for approval as if by doing this I'm going to realize we have something in common, throw myself at him and beg him to take me right here on the table! Nope! I don't want a lap dog guy; I want an independent guy.

"Okay, well you ordered. It's not a great date but maybe a good friend. Be positive" I tell myself.

So, we try to talk about work but he doesn't say much. He just cut a few promos for a few tv shows I haven't seen and while half of America may think they are the best shows ever, I can't bring myself to be interested at all. I think one of the shows was guys on a boat fishing in storms?

"So, when you see the commercial for a TV Show, that’s what I just did."

"Well, that sounds interesting" I respond. It is true. It would be interesting if I liked whatever show that was.

"How did you get started in this profession" I ask.

After a few minutes it turns out they make quite a few talk shows not far from where I live! I don't mean like The Talk, which I have no idea where that one is done. I mean TV Shows with episodes called "I am NOT the father" where they bring up ex's who hate each other. She swears the kid is his and he swears it’s not. It turns out she slept with like 2 other guys and they broke up. Then the Host says he has the DNA results. Either the man is the father and he starts promising to take care of the kid or he's not the father in which case he starts jumping around the stage, calling the girl a whore, and laughing. I always feel so awful for the Mom's and especially the children involved.

The Director tells me how they have to keep the couples in separate hotels sometimes and make sure they don't see each other until they are on stage. Then the desserts come.

I start making my little coffee with cream and the brown natural sugar if they have it, otherwise I'll grab regular. He likes his coffee black and reached for the dessert first. He took one bite and then the whine started again. Hiiiiggghhh pitch to deep low pitch, medium to low pitch...hiiiigh-

"TALK to me" I said a little frantic. "Where do you live? In town?" which is now code for "STOP MAKING THAT DAMN NOISE".

"I live with my Mom and Sisters about 15 minutes from here."

I'm in mid sip of my coffee and cough. Women! Luckily it didn't take me long to recover. He lives with women and they didn't pluck his eyebrows?

"Really, are you close to them?" The question humors me and then I instantly feel bad. It's not okay to make fun of someone ever.

Okay, maybe I’m a bit shallow because unibrow with whine will never get my panties wet and if I’m not sexually attracted, I’m not sure how a relationship would ever work. It also doesn't help that so far we don't have much in common to talk about. His shows that he likes and works on are not the same as I like. Some religions however think the unibrow is a sign of fertility and intelligence. His eyebrows are like Groucho Marx but all the way across.

Do I dare, I ask myself. I dare. I ask about religion and culture, a huge faux pas.

"We are American Christian culture but I don’t' go to church" he responds.

So much for that idea, I think to myself.

I honestly can't remember what we talked about next but he started to tell me some story and I smiled at him eating my cheesecake and sipping coffee passing time and keeping conversation. I can't find common ground on anything so now it’s just counting down the clock. Then it happens, he throws his head back but instead of laughter its "ah... ah... ah". He is The Count from the MUPPETS!

Pause - He's not the actual voice of him but his laugh is The Count and I immediately picture the Count counting "One ah ah ah... TWO ah ah ah"...

Resume - I gave a polite laughter to his story and put my head down.

"Shoot me!" I tell myself. A part of me was waiting for Ashton Kutcher or someone to run around the corner and tell me I was on some MTV Show like "Punkd", "Disaster Date" or "Boiling Points".

The check came and I offered to pay for my half but he insisted which was super sweet. Then that damn whining sound while giving his credit card and signing the check - AH!!!

We get out to the parking lot and he says "Well I have another date".

I secretly had a wave of relief, told him to have fun, ran to my car and immediately called my friend.

"WHERE are you FINDING these people? Do you like me at ALL?  Where are you because you are ordering me a drink! Have you heard the noise he makes when-"... 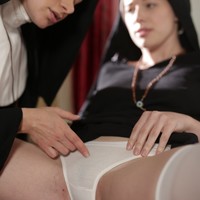 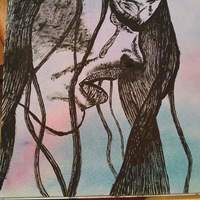 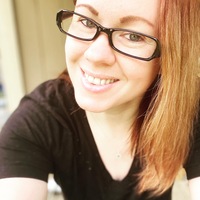 My Favorite Part of Sell...
all articles